Do you subconsciously feel the presence of uncertain problems in your life? Are you unable to figure out your mission? Don't you understand why certain events happen to you? Are you worried whether karmic debts will be presented for payment?

Analysis of the karmic horoscope can answer many such questions. The good news is that you don’t need to know the exact time of birth for this type of analysis. 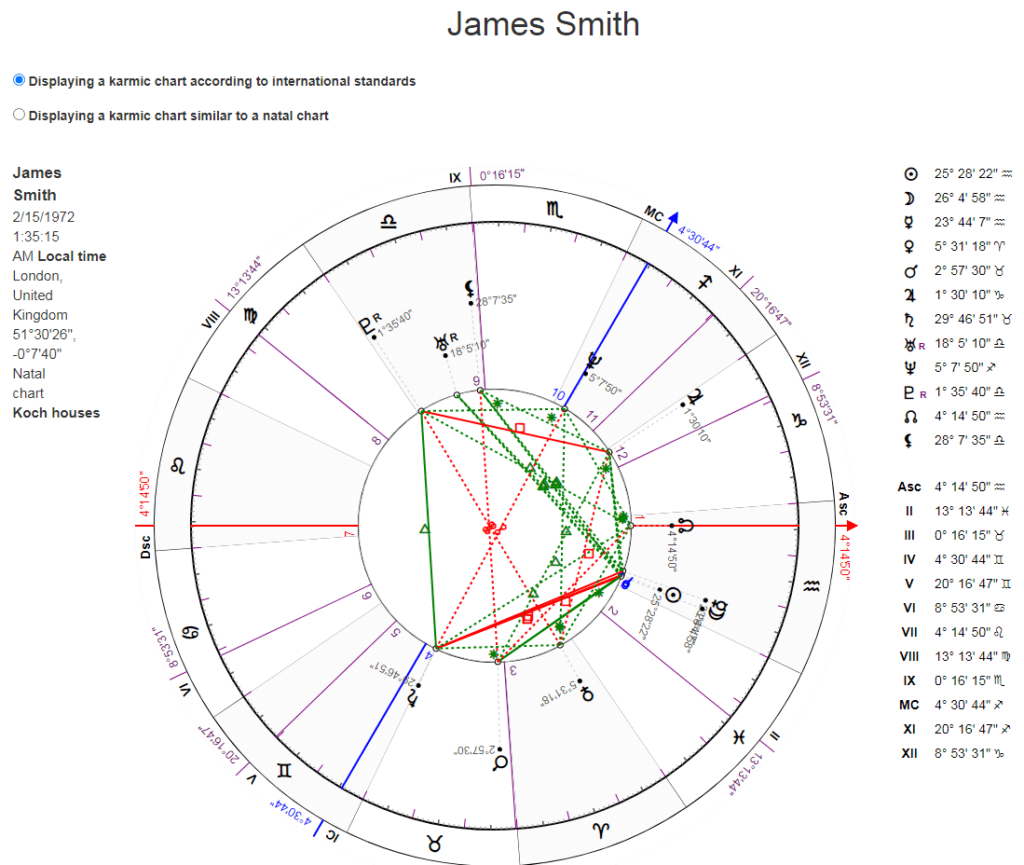 The Felicita program analyzes the karmic horoscope according to many parameters, which include: 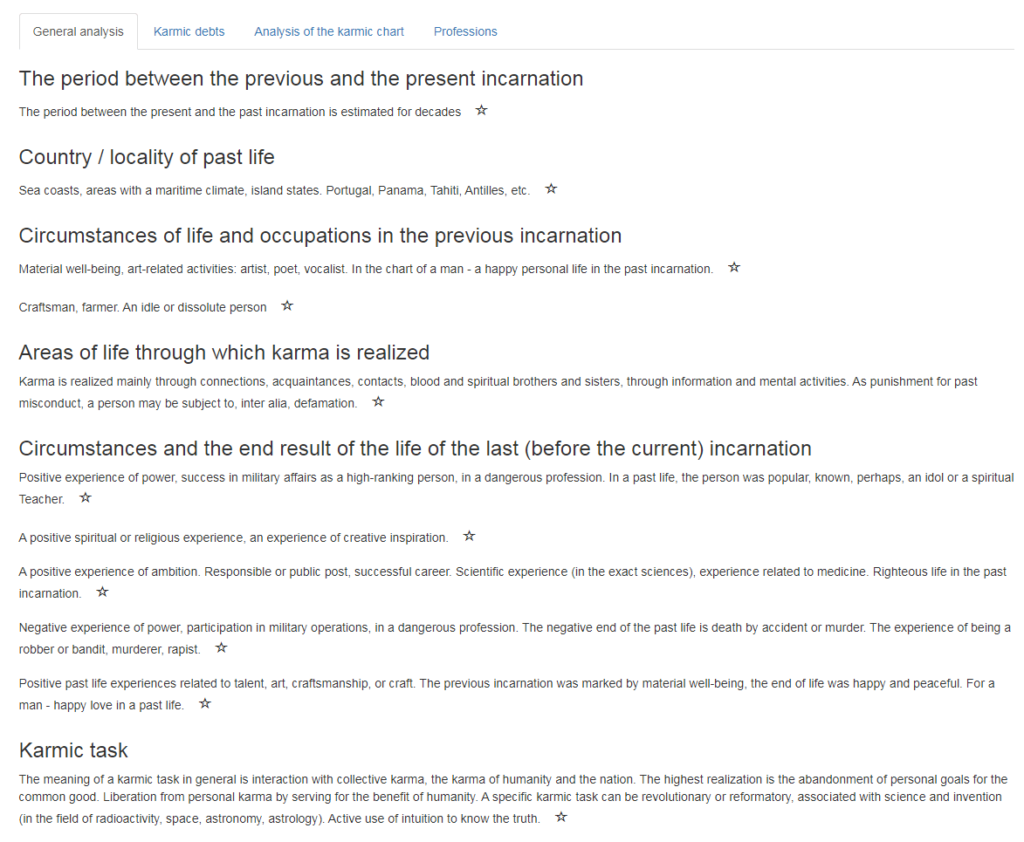 The “Karmic debts” tab displays the karmic debts that will be “presented for payment” in the current incarnation, along with their description and methods of redemption. Karmic debts and spheres of life, through which the realization of karma will occur, are displayed for the natal and the local chart. These can be interpreted as a change in debts presented for payment in case of relocation (since there are a lot of debts accumulated over all previous lives, due to the relocation and the change in the horoscope, there will be one or more of them). It is also possible to change the sphere of realization of karma – this issue requires study, and is worthy of discussion.

It should be borne in mind that karma is divided into mature and immature. Mature karma exists independently of a person, lives a separate life and comes to them in the form of certain events. A person cannot get rid of it, for example, in the case of hate debts (violation of Ahimsa), mature karma returns in the form of dangerous events. A person can protect themselves from such karma only with the help of good karma (earned through efforts to save other people), which will also provide them protection in a difficult situation.

Immature karma is the basis of a person’s karmic memory. Since it is not yet separated from the human being, it can be changed. Immature karma includes personality traits, diseases, talents and abilities, vices and virtues.

It is impossible to take on someone else’s karma.

Commandments, violation of which leads to the appearance of karmic debts:

Ahimsa – not harming other people; killing animals for the purpose of eating in the most humane way, without malice and not for pleasure.

Satya means truthfulness and sincerity, mainly in front of oneself (that is, inner truthfulness). According to the occult law of identity, the external truth is dissolved in the internal truth of a person, which gives him the possession of Truth.

Asteya means non-appropriation of someone else’s non-acquisitiveness, and acquisitiveness means the desire to appropriate both material and non-material benefits that do not belong to a person by right. Asteya’s Christian correspondence is the commandment “Thou shalt not steal.”

Perfection in Asteya gives a person the opportunity to never be in poverty, since everything that they really need will come to them on its own.

Violation of Aparigraha is the forcible imposition of one’s views, teachings, and violence against someone else’s will, as well as, on the other hand, slave psychology and shifting responsibility onto a more authoritative person.

The Brahmacharya commandment refers to self-discipline, control over your desires in various areas of life. It includes practicing moderation and rationality in food and alcohol consumption, in sexual life, as well as having control over your laziness, talkativeness and similar personality traits.

The karmic debts of Brahmacharya associated with incontinence in past incarnations can manifest in the form of diseases for payment in the current life. Therefore, the program, when drawing up a Health map, takes into account whether the aspects that create Brahmacharya’s debts are involved in the formation of diseases. If they do, the program displays a “K” next to the disease. Special attention should be paid to this disease, since it is a karmic punishment, and, accordingly, can bring major problems to a person’s life.

Analysis of karmic talents and abilities 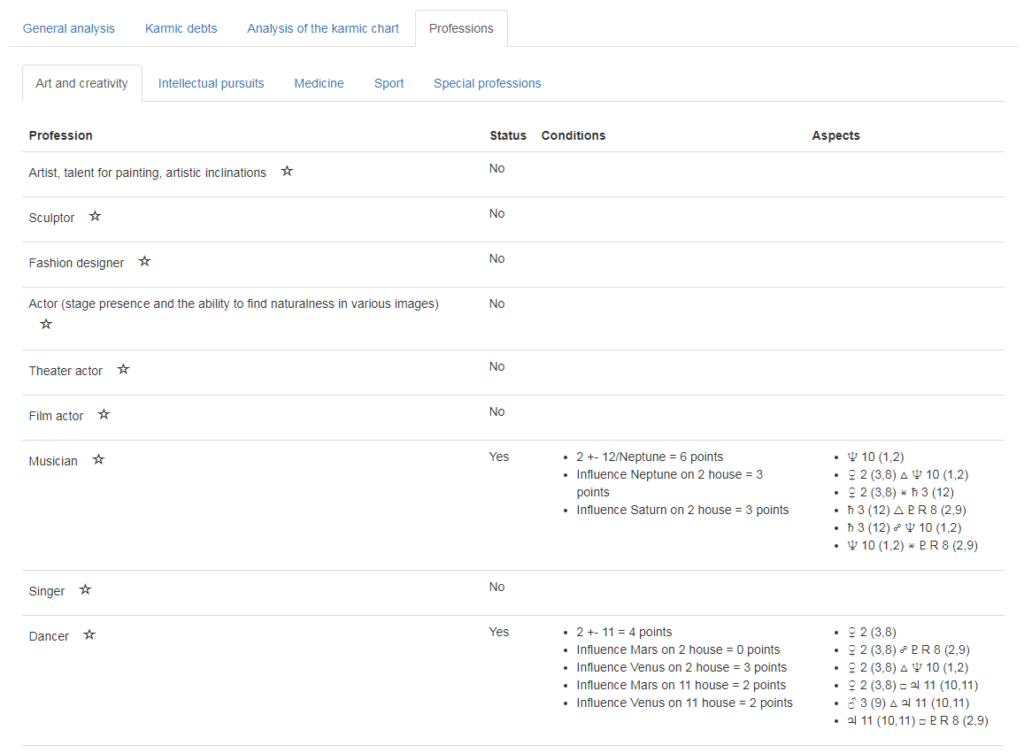