Don't you understand the motivation for your actions or your reaction to the world around you? Are you surprised by the actions or worldview of your loved one?

A detailed individual psychological profile can answer a lot of your questions. You will receive information about which of your character traits require first awareness and acceptance, and then work on them in order to correct and improve your inner “I” to harmonize yourself and your position in the world.

It should be borne in mind that many personal characteristics, determined by more accurate horoscope settings, depend on the place of residence and require a more accurate time of birth. Explanations of such characteristics should be found in the section Horoscope – Life circumstances – Personal qualities, and The Seal of Happiness / Seal of Unhappiness.

The Psychological Profile section forms the personified character of the owner of the horoscope based on the positions of the planets in the signs and other aspects. The total number of tense and harmonious aspects of the planet is taken into account, which makes it possible to determine the character of a person with a large degree of individuality. 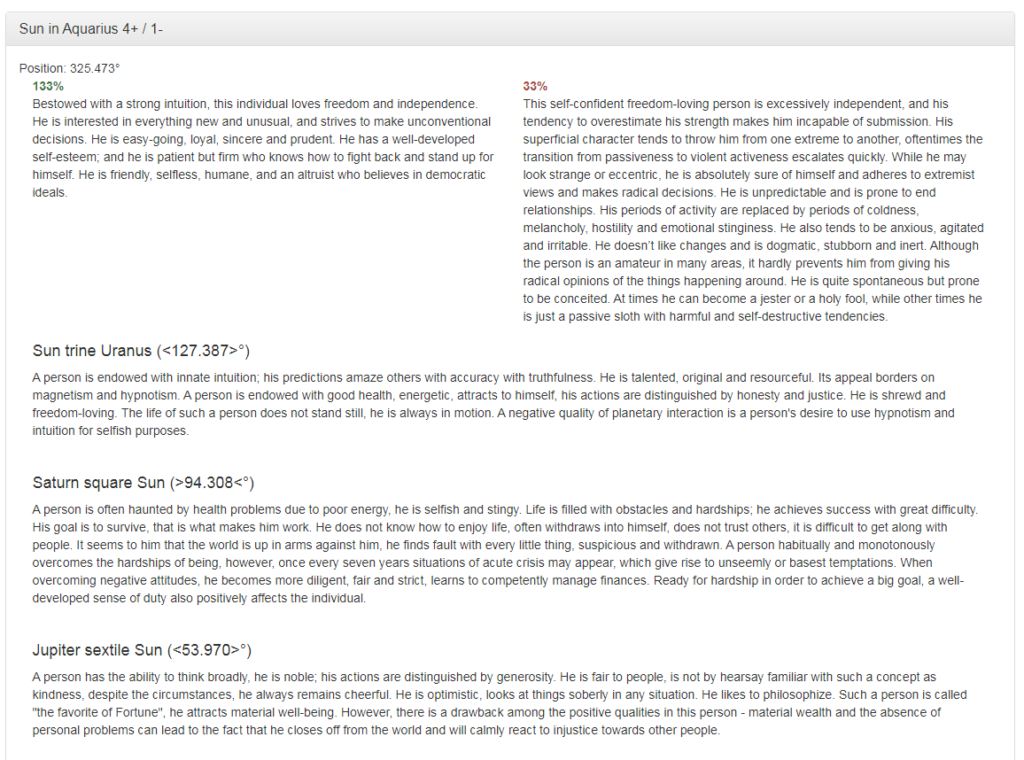 According to the rule of three indications used in the applied method, the program takes 3 harmonious or 3 tense aspects as 100%. That is, at 100%, these qualities will manifest themselves completely in a person’s character, and they are integral components of their nature.

In the absence of tense or harmonious aspects of the planet, the program shows 0%, which means that these qualities of character will practically not be manifested, with the exception of possible manifestations in rare periods of time, with appropriate transit aspects.

Intermediate values of 33% or 66% give an approximate idea of the severity of these character traits in the personality of the owner of the horoscope. If a planet has more than 3 harmonious or 3 tense aspects, the program displays, respectively, the number of percent more than 100, which also makes it possible to estimate how bright a role this planet will play in the character of the person.

Descriptions of planets in signs and aspects of planets are made on the basis of the method of astro-psychological synthesis, which, among others, is the most valuable contribution of Academician Sergei Shestopalov to astrological science. This method provides information in a concentrated form, which avoids vagueness and ambiguity of interpretation.

The brevity and accuracy used in astro-psychological synthesis, perhaps, make the psychological portrait somewhat smaller in volume than other available treatises on many pages. The average volume of a psychological portrait calculated by the Felicita program is 5-6 A4 pages, but each sentence in it is important to get a complete picture of the character of the owner of the horoscope.